We’ve seen a growing interest recently in gas suppression fire prevention systems. These systems are far better at limiting the damage to equipment and possessions when a fire breaks out.  This is because traditional fire prevention systems typically use water or foam to suppress the flames, and this can indeed damage items such as electrical goods, fabrics and paintings.

Gas fire suppression systems have been around since the early 2000s.  In essence, when a fire is detected, the system releases gases to reduce oxygen and stop the fire in its tracks.

One such approach uses inert gases, which reduces oxygen in the location to below 15%.  This is because fires need more than that percentage to burn.  In case you’re wondering, the air we breathe has approximately 21% Oxygen and yet we only need 12% to survive. By reducing the oxygen to below 15% the system, stops the fire but ensures it is safe for humans to enter the location afterwards.

The inert gas typically used in these systems is Inergen.  This is naturally occurring and contained in the air we breathe.

Gas suppression systems have been popular for locations with extensive electrical equipment, such as Data Centres, Server Rooms, Healthcare equipment rooms and other IT-related sites.  They are also being utilised by organisations with priceless/heritage objects such as museums, the antique and fine art sector and heritage properties.

More recently we’ve seen them gain popularity in the household market. For example, we were able to help a client who wanted a fire suppression system to protect his fleet of luxury cars.  The 31 cars were housed in an underground car park in their home and they wanted a fire suppression system which would extinguish a fire, but not damage the vehicles in any way.  Conventional systems using water or foam were clearly not suitable.  We therefore designed and installed an inert gas suppression system which, when activated, would leave the vehicles unscathed.

The benefits these systems bring

Working in tandem with a fire detection system, gas-based fire suppression brings a number of significant benefits. As well as halting the fire in its tracks, it can minimise the damage involved in doing so, which means there is usually very little clean up or residue to deal with after the fire has been put out.

These systems are also harmless to the people on site and the property’s features and equipment. They react within seconds to extinguish a fire and this means reassuringly fast fire protection. It also means the property will experience minimum down-time and can quickly resume normal life/business soon after a fire. One final point to note is that both inert gas and clean agent systems are safe for the environment and have zero o-zone depletion potential.

If you would like to learn more about the benefits of any fire suppression systems for your organisation or home, please contact the Absolute Security sales team on e sales@absolutesecurity.co.uk or t 01483 791500. 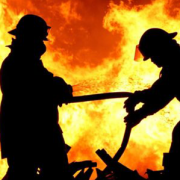 A reminder of employers’ responsibilities for fire safety